Kyphosis (Curvature of the Spine)

Kyphosis is a spinal disorder in which an excessive outward curve of the spine results in an abnormal rounding of the upper back. The condition is informally known as “roundback” or “hunchback.” Do not confuse with Lordosis. This disorder occurs when the vertebrae in the upper back become more wedge shaped. A variety of disorders may be responsible for this condition, including facet joint arthritis or even Ankylosing Spondylitis.

Usually, a visit to the doctor is brought on by a scoliosis screening at school, concern about the cosmetic deformity of a rounded back or pain combined with poor posture. The doctor may ask the child to bend forward so that he or she can see the slope of the spine. X-rays of the spine will show if there are any bony abnormalities. X-rays will also let the doctor measure the degree of the kyphotic curve. Any kyphotic curve that is more than 50 degrees is considered abnormal.

mumuHow DO I Know if it’s Scoliosis or Kyphosis? 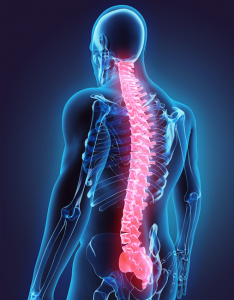 Kyphosis is excessive curvature of the spine in the sagittal plane (an anatomical boundary that divides the body into right and left parts), meaning the upper spine curves outward. Scoliosis is a condition in which the spine curves to the left or right, creating a “C” or an “S” shaped curve.

The normal back has 20° to 45° of curvature in the upper back, and anything that exceeds 45° is called kyphosis. Scoliosis is abnormal curvature of the spine in the coronal (lateral) plane. Scoliosis of between 10° and 20° is diagnosed as mild.

Patients may develop scoliosis or kyphosis spinal deformities in adulthood, or the deformity may have been present since childhood and become progressively worse. Generally, a mild scoliosis and/or kyphotic curvature does not cause significant pain or disability.  More severe cases can cause muscle spasms.

Can Kyphosis Be Corrected?

Most cases of kyphosis don’t require treatment. Kyphosis that is caused by poor posture (postural kyphosis) can usually be corrected by improving your posture. If you have mild to moderate kyphosis, it may be possible to control your symptoms using painkillers and exercise.

Teenagers with mild to moderate kyphosis may need to wear a back brace while the bones are still growing to prevent the curve getting worse. While wearing a brace may feel restrictive, modern braces are designed for convenience, making it possible for patients’ to take part in a wide range of physical activities. Bracing is recommended for younger patients who are still experiencing spinal growth, which usually stops growing around 14 or 15 years old.

Surgery is another form of treatment that can usually correct the appearance of the back and may help to relieve pain, but it carries a higher risk of complications. Surgery is only recommended for more severe cases of kyphosis where the potential benefits outweigh the risks.

Surgery for kyphosis would usually be recommended if:

A technique called spinal fusion is usually used to treat kyphosis. It involves joining together the vertebrae responsible for the curve of the spine.

To read more about the various types of spine conditions, click here.