What is a Tibial Plateau Fracture?

A fracture, or break, in the upper part of the shinbone (tibia) may result from a low-energy injury, such as a fall from a height, or from a high-energy injury, such as a motor vehicle accident. Proper identification and management of these injuries will help to restore limb function (strength, motion, and stability) and reduce the risk of arthritis. 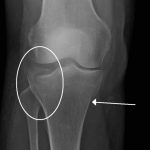 The soft tissues (skin, muscle, nerves, blood vessels, and ligaments) also may be injured at the time of the fracture. Because of this, the orthopedic surgeon will also look for any signs of soft-tissue damage and include this in plans for managing the fracture.

The bone comprising the tibial plateau is cancellous (“crunchy”), as opposed to the thicker cortical bone of tibial shaft. The composition of the bone is important, because cancellous bone may compress and remain depressed when it is injured.

Soft tissues are also at risk. Nerves and blood vessels coursing through the knee are adjacent to the bony structures and may be injured as well. The skin surrounding the joint may be compromised by the injury itself or the soft-tissue swelling that often follows.

Whether the injury is treated with surgery or without, both the bony injury (fracture) and any soft-tissue injuries must be treated together.

Causes of a Tibial Plateau Fracture

Fractures that involve the upper fourth of the lower leg, or tibia, may or may not involve the knee joint. Fractures that enter the knee joint may render the joint imperfect and the joint surface irregular. Additionally, these fractures may result in improper limb alignment. Either of these factors may contribute to excessive joint wear (arthritis), instability, and loss of motion.

A fracture of the upper tibia can occur from stress (minor breaks from unusual excessive activity) or from already compromised bone (as in cancer or infection). Most, however, are the result of trauma (injury).

Young people experience these fractures often as a result of a high-energy injury, such as a fall from considerable height, sports-related trauma, and motor vehicle accidents. Older persons with poorer quality bone often require only low-energy injury (fall from a standing position) to create these fractures.

Many older persons may also have medical concerns, such as heart or lung problems, diabetes, or other diseases which must be considered and addressed.

Where a fracture is located within the knee and how much it is displaced (“moved”) is referred to as its “pattern.” The pattern of a fracture is determined by the force of the injury, in addition to how and where that force is applied to the limb. Forces can come from direct impact (dashboard); vertical impact (fall); bending (falls, sports and vehicular injuries); or some combination of such forces.

Symptoms of a Tibial Plateau Fracture

A fracture of the upper tibia (shin bone) may result in injury to both the bone and the soft tissues of the knee region. The symptoms of a tibial plateau fracture are: 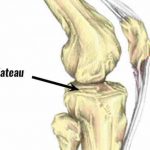 Pain On Bearing Weight. Typically, the injured individual is most aware of a painful inability to put weight on the affected extremity.

Tenseness Around the Knee; Limited Bending. The knee may feel and appear tense, owing to bleeding within the joint. This also limits motion (bending) of the joint.

Deformity Around the Knee. The leg may or may not appear deformed.

Instability of the knee.

Pale, Cool Foot. A pale appearance or cool feeling to the foot may suggest that the blood supply is in some way impaired.

Numbness Around the Foot. Numbness, or “pins and needles,” within the region of the foot raises concern about nerve injury or excessive swelling within the leg.

If these symptoms are present after a fracture, you should have an assessment done in the emergency room.

Emergency Care for a right or a left tibial Plateau Fracture

Infrequently, soft-tissue swelling may be so severe as to threaten blood supply to the leg and foot (a condition referred to as compartment syndrome). This may require emergency surgery in which vertical incisions are made to release the skin and muscle coverings. This is called a fasciotomy. These incisions are often left open and then closed or covered days or weeks later as the soft tissues recover and swelling resolves.

If the condition of the soft tissues is such that the application of a cast or splint would be unwise, an “external fixator” may be considered. With this device (often temporary), pins are inserted above and below the joint. These pins exit the skin and are connected by bars, which stabilize the knee joint.

There are six known types of tibial plateau fractures.  The severity of the break is directly related to the intensity of the energy impact to the bone.

In this type of a fracture, a wedge-shaped pure cleavage fracture and involves a vertical break of the lateral tibial plateau, usually the result of a low energy injury in young sports athletes. This type of injury represents 6% of all tibial plateau fractures.

This type includes both a cleavage and compression fracture and involves vertical break of the lateral condyle (one of the two projections on the lower extremity of the femur) combined with impact of the opposite load bearing part of the condyle.  This is the most common tibial plateau fracture, resulting in up to 75% of all tibial plateau fractures.

This type involves a pure compression fracture of the lateral or central tibial plateau in which the articular surface of the tibial plateau is impacted and driven down into the lateral tibial mataphysis.  Typically, a low energy injury from a fall or sports injury causes these fractures, which are more frequent in patients in their 40s and 50s with osteoporotic changes in bone. They are extremely rare.

Consists of a split fracture of the medial and lateral tibial plateau, which is usually the result of a high-energy injury acting upon the tibial plateau.  Most commonly, this injury can include injury to the anterior cruciate ligament and collateral ligaments and exists in 3% of all tibial plateau fractures.

In this type of fracture, a transverse subcondylar break with dissociation of occurs. This is a high-energy, typically sports injury where up to 33% of these fractures may be open. Overall represents about 20% of all tibial plateau fractures.

If surgical treatment is elected to obtain and maintain alignment, several devices may be considered.

Rods and Plates. In cases in which the upper one-fourth of the tibia is broken, but the joint is intact, a rod or plate may be used to stabilize the fracture. A rod is placed in the hollow medullary cavity in the center of the bone, whereas a plate is placed on the external surface of the bone.

Plates are commonly used for fractures that enter the joint. If the fracture enters the joint and depresses the bone, lifting the bone fragments may be required to restore joint function. Lifting these fragments, however, creates a defect, or hole, in the cancellous (“crunchy”) bone of the region. This defect must be filled with material to keep the joint from collapsing. This material can be a bone graft from the patient or from a bone bank. Synthetic or naturally occurring products which stimulate bone healing can also be used.

To further stabilize this area, a plate with screws is applied.

In some cases, the condition of the soft tissue is so poor that the use of a plate or rod might threaten it further.  An external fixator (described under Emergency Care above) may then be considered as final treatment. The external fixator is removed when the injury has healed.