A hand deformity that usually develops over a number of years, Dupuytren’s disease (or Dupuytren’s contracture), affects more than 200,000 individuals per year. The condition affects a layer of tissue that lies under the skin of the palm. Knots of tissue form under the skin, eventually creating a thick cord that can pull one or more fingers into a bent position. Firm pits, nodules, and cords may develop that can cause the fingers to bend into the palm, which creates a condition described as Dupuytren’s contracture.

The affected fingers cannot straighten completely, which can complicate everyday activities including placing your hands in your pockets, putting on gloves, or even shaking hands.

While many believe that Dupuytren’s disease arrises due to hereditary or genetic factors, certain risk factors may also play a role in disease development. Risk factors include:

The initial lumps may produce discomfort that usually resolves with time but Dupuytren’s disease typically does not cause hand pain. The disease may first present itself in the form of an individual having difficulty placing the hand flat on an even surface. For example, a tabletop. With time, the tissue thickens and fingers draw into the palm. When this occurs, one may notice increasing difficulty with activities including washing hands, wearing gloves, shaking hands, and putting hands into pockets.

In the later stages of Dupuytren’s contracture, cords of tissue form under the skin of the palm and can extend up to the fingers. As these cords tighten, the fingers may pull toward the palm, sometimes severely. 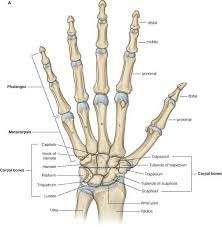 Other symptoms of Dupuytren’s disease include:

To diagnose Dupuytren’s disease, or Dupuytren’s contracture, the hand and wrist orthopedic specialist starts with a physical exam. The doctor asks about medical and family medical history and performs physical tests of the effected hand. Typically doctors do not need to order diagnostic testing but they may order it to ensure lack of other ailments or injury to the hand.

Treatments include the following: