The elbow is a resilient joint, but when people fall on an outstretched arm the elbow can be bent in directions that it should not be bent.  Often the damage is minimal with only microscopic damage or even partial tearing of the ligament.  However, sometimes the ligament is torn completely with the person experiencing an audible pop as the ligament gives out and snaps.  The three ligaments of the elbow are all integral to its function and the rupture of a ligament will destabilize the joint and possibly dislocate the bones from their proper positions.

If one of the three elbow ligaments in completely ruptured, then surgery may be considered to reconstruct the tendon.  The procedures are slightly different depending on which ligament is torn. 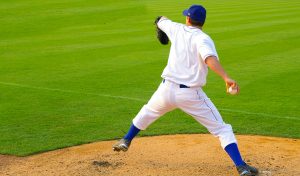 The Ulnar Collateral Ligament can become torn from a fall or repetitive overhead throwing movements.  The UCL is most commonly torn by baseball pitchers and strangely became an ethical conversation in the sport because can potentially make a pitcher throw a faster ball after reconstruction.  The UCL reconstruction, or Tommy John Surgery, is procedure in which donor tissue, called allograft, or the patient’s own tissue, called an autograft, is used to rebuild the torn tendon entirely by anchoring the tendon down to bone.  Athletes, specifically pitchers, have a yearlong recovery before they can return to sport.  Non-athletes can get by with a six-month recovery.

The Radial collateral Ligament, or also called the lateral collateral ligament, is a important stabilizing structure of the elbow when performing rotation of the forearm.  Rupture of this ligament is usually associated with a forceful dislocation of the elbow or a fracture.  Repair of this ligament is usually done at the emergency orthopedic physician’s discretion during a surgical procedure for dislocated fractures called an ORIF, or Open Reduction Internal Fixation, when the elbow has been fractured and dislocated.  The reconstruction is going to harvest the patient’s excess tissue, or use donor tissue, to replace the torn ligament.

Annular Ligament of the Elbow Reconstruction

The annular ligament is used for stabilizing the radius at the elbow when twisting the hand.  A complete rupture of the annular ligament would make rotational tasks such as using a screwdriver impossible.  However, injuries of the annular ligament are usually limited to collateral damage from trauma fractures and congenital deformity.  If the ligament ever needs to be reconstructed it is usually done as an addition to an ORIF surgery with autograft, or allograft.

Needing Elbow Ligament Reconstruction?  Get the All Star Orthopedic Treatment at AOA Orthopedics! 817-375-5200